Network and architectures for smart parking

The LoRa (Long Range) protocol  is an “expanded spectrum” modulation technique purchased by Semtech (USA) in 2012.

The LoRa protocol uses the so-called free-use frequencies, called ISM (Industrial, Scientific, Medical), reserved mainly for industrial, medical and scientific use, but which are employed by all radio devices on the market that can be purchased and used freely, such as gate remote controls, Wi-Fi devices, radio alarms, etc.

Operators using these devices are not subject to authorizations or the payment of fees. In every country it is possible to find some public operators and dozens or hundreds of private companies that “sell” the connection for the devices.

The data transmission speed is called Spreading Factor (SF). The range of SFs used goes from SF12, the slowest, which allows communication of about 250 bps (bits per second), up to SF7, the fastest, with about 11,000 bps.

The battery consumption at SF7 is considerably lower compared to an SF12 but the slower the SF, the more it can penetrate obstacles and communicate long distance. Imagine yourself in a crowded square, at 20 meters from a person that can take 20 seconds or 200 seconds to communicate with you. If he wants to communicate clearly and at a greater distance it can take longer and it is necessary that he speaks very loudly, getting tired first (the equivalent of the battery that is consumed faster), or he can get closer and therefore speak faster and at a lower volume (equivalent to using more gateways).

This is the reason why Intercomp always tries to use the SF7 in its installations: it is better to have few more gateways than having to replace the sensor batteries every 2 years instead of every 8/10 years.

The Intercomp sensor is compatible and certified by the LoRa Alliance™ with the EU863-870 channel plan and base transmission and reception frequency at 868 MHz. It can be used throughout Europe, the Middle East and in some African countries.

Three different configurations are available for our devices.

It is built according to the specifications of the LoRa Alliance™, which includes devices, gateways, a network server and a management platform (for example our POLIS). Gateway and network server are the devices that the public or private LoRaWAN® operator must make available. The problem of saturation arises for very large numbers of sensors but generally the manufacturers of gateways and network servers declare the possibility of connecting several thousands of devices (even up to 20,000), even though much depends on the traffic generated.


LoRaWAN® SPN is a variation to the LoRaWAN® which uses gateways with an integrated network server with reduced features, compared to a real network server. Each SPN gateway allows to manage a few hundred devices. It is useful to create private LoRaWAN® networks very quickly, saving the cost of a network server (a few tens of thousands of euros).

The components of this architecture are the LoRa Intercomp sensors, the R3000 Intercomp gateways (that can be powered in high or low voltage) and the POLIS management platform.

Each gateway can manage up to 150/200 sensors. Beyond this number, the gateway can work, but two factors may arise which must be taken into consideration:

The frequencies dedicated to NB-IoT (the so-called 4G in use by telephone operators) are not for public use, but an operator must purchase licenses from the various countries where it wants to work in order to use those frequencies, which generally cost several hundreds or thousands millions of euros or dollars (for example, in Italy, auctions for the use of frequencies reserved for 5G were awarded for 6.55 billion euros). In each country there are generally from 2 to 4 operators capable to offer the connection.

NB-IoT operates in the same way as telephone data communications, but unlike the phones (to which it is necessary to recharge the battery practically every day) for devices such as our sensor, operators must apply a particular configuration which guarantees the sensor a lot of autonomy about when to close the communication and remain in stand-by.

NB-IoT network, unlike LoRa, can control the connected devices, awake them and make them remain online for the desired time. However, it is possible for operators to adopt a configuration to allow NB-IoT devices some freedom to close connections once the packet has been transmitted.

The communication speed is not significant for consumption while network configuration and transmission power are very relevant.

With NB-IoT there are no bandwidth occupation limits and therefore a device can remain in transmission for an unlimited period. Obviously if the device is battery powered and an underground installation is chosen (as for Intercomp sensors), the less time and power the device uses to communicate, the longer the battery lasts.

The frequencies employed by NB-IoT are called bands and are wider than LoRa. The B20 (800 MHz) and the B8 (900 MHz) are present in 67.8% of the market worldwide. Indeed, for the same power, they guarantee good penetration and communication distance (the higher the frequency, the more it is filtered by walls and other obstacles).

With NB-IoT networks there are not many architecture variables: the only possible variable is the operator (and therefore the SIM) to be used. In the case of a sensor, communication with the telephone cell is direct after configuration of the network parameters.

Regarding the problem of saturation, operators guarantee tens thousands of devices that can be connected to the same cell.


In smart parking projects all architectures can be used, evaluating the strengths and weaknesses of each. Regarding LoRaWAN®, even if manufacturers declare thousands of manageable devices, it always depends on the quantity of packets that the devices send. In the case of smart parking sensors, it is preferable not to exceed the number of a few hundred per gateway, not to overload the network and to be able to use the Confirmed Packet.

The exact sizing calculations of a LoRaWAN® network can be performed using specific software which are able to calculate, based on the area to be covered, the number of devices, the daily or hourly quantity of packets to be received and the desired signal quality, position and number of gateways required.

Below is a comparison between networks and architectures for smart parking. 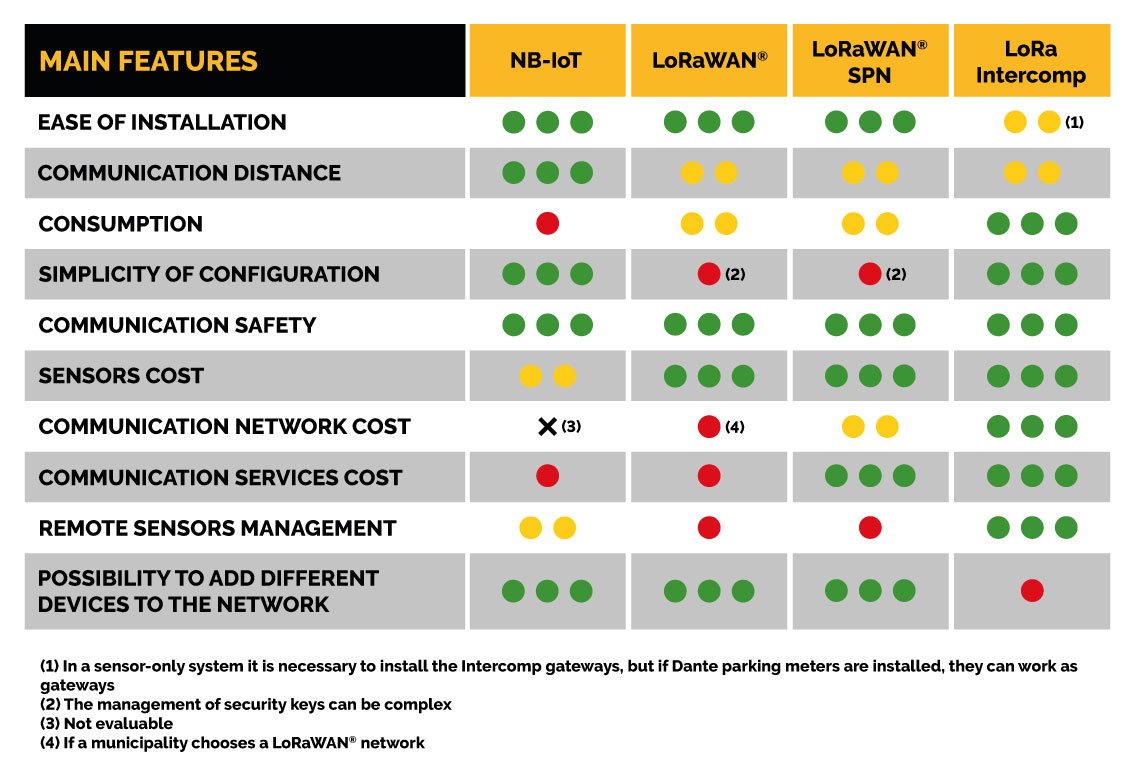 Come and meet us

A solution to make efficient and profitable the parking management on cities streets.